Women are not only underrepresented offscreen, we also see them less often on screen, TV and in streaming media. With NEROPATM Neutral Roles Parity Belinde Ruth Stieve has developed a method to counteract this situation and help to change scripts in a more gender equal and diverse direction. The method is performed by a steering group of three within a filmproduction who follow   a comprehensible, systematic and straightforward procedure, in the end they don’t add additional characters, but  convert a number of neutral (formerly male) roles into females.

The first step is the production’s decision to adopt the method NEROPATM – Neutral Roles Parity.

Then a team of three people is appointed to implement the method, ideally representing different departments like casting, directing, production, script writing, commissioners etc.. They will check the script and the roles and mark them according to their gender, as implied by role names (Frederic, Lisa), labels (Mr. Harrison, mother), pronouns in dialogues or instructions (he, him, she, her) or contexts (“someone from fathers’ self-help group”, “member of women‘s gym“) etc.

Then – still individually – they identify all characters that could be any sex as “neutral”, no matter if these roles are big or small, and whether they have a name or not. A general question to ask could be “Does this character have to be male, and if yes, why?” If not, they are neutral.

Once this is done the members of the team get together, compare their results, negotiate and eventually agree on the neutral characters. Then these neutral roles are specified as female – male – female – male alternatively. The script is adapted accordingly, e.g. names and pronouns. That’s it! Now the character list is complete and the casting process can begin. 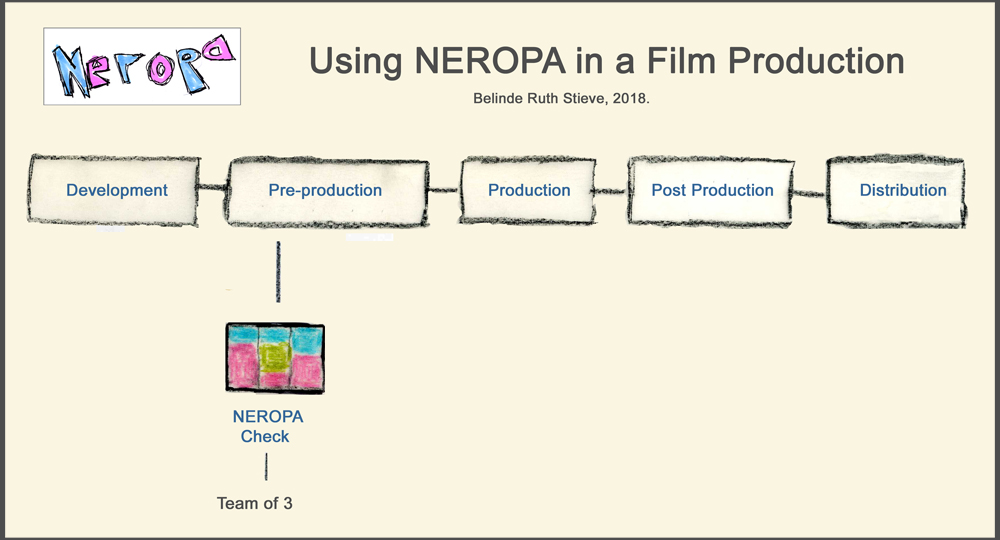 And there the concept of Finetuning can be applied, which will further diversify the cast, relating age, physical appearance, ethnical background etc.

There are film casts that consist nearly totally of men and which have to stay like that. Very often these are films based on historical events, for example LA MER Á L‘AUBE or FREISTATT / SANCTUARY. Then there are boys‘ boarding schools films like DEAD POETS‘ SOCIETY oder LES CHORISTES / THE CHORUS where the only female roles are small and less important, usually they are mothers or pupils from a nearby girls‘ boarding school. For these scripts the NEROPATM Check will probably not result in neutral roles. Of course there is a difference if a character is female or male, just as the eventual casting will have an impact (as far as age, looks, type, interpretation, voice etc. go), but for the film‘s story the gender of the neutral roles does not matter. This is probably quite underandable with small parts, i.e. the roles with only one or two days of shooting that only appear in few scenes and generally meet the leading characters in a certain function. Does it have to be a male journalist, a male doctor in the emergency unit, a male registrar, a male bus driver, a male electrician, a waiter? Or could it possibly be a female journalist, a female doctor, a female registrar, a female bus driver, a female electrician, a waitress?

However, the gender of larger roles, even the leads, is not set in stone. The most famous example is perhaps that of reporter Hildy (Hildegard) Johnson in HIS GIRL FRIDAY, who is the most important character next to newspaper editor Walter Burns. Hildy, Hildebrand Johnson, was a man in the original play THE FRONT PAGE that the film is based on. As the legend goes in one of the numerous auditions for the part of Walter Burns his counterpart Hildy was read by Howard Hawk’s hitherto unnamed female secretary. Hawks seems to have been so thrilled by the new dynamics resulting from a male-female-interaction that he had the script changed. So Hildy Johnson became a female reporter and also Burns’s ex-wife.

Some plots will only be about men.

There are film casts that consist nearly totally of men and which have to stay like that. Very often these are films based on historical events, for example LA MER Á L‘AUBE or FREISTATT / SANCTUARY. Then there are boys‘ boarding schools films like DEAD POETS‘ SOCIETY oder LES CHORISTES / THE CHORUS where the only female roles are small and less important, usually they are mothers or pupils from a nearby girls‘ boarding school. For these scripts the NEROPATM Check will probably not find (m)any neutral roles.

Some stories are already gender-balanced.

There are other film scripts that have just as many female as male characters, both in the leading and in the supporting roles, this is the case for scripts by Sally Wainwright (TV series LAST TANGO IN HALIFAX, SCOTT AND BAILEY, HAPPY VALLEY) or Agnes Jaoui / Jean-Pierre Bacri (ON CONNAÎT LA CHANSON, LE GOÛt DES AUTRES, COMME UNE IMAGE, PARLEZ-MOI DE LA PLUIE, AU BOUT DU CONTE). Films like these are quite rare though.

And maybe sometimes all characters could be neutral?

These scripts probably don‘t exist yet, but who knows what the future may bring and in any case it‘s worth a try. The roles will be defined as persons with certain characteristics. Then the search for the best cast can begin, with gender being a secondary issue.
Especially the science fiction genre could offer freedom and a future beyond binary gender roles and male dominance in positions of power – something that can be written without the need for immense fantasy. We have seen this in the past, sometimes a little better (RAUMPATROUILLE / SPACE PATROL ORION) usually worse (STAR TREK, STAR WARS, MOON). However, we could create a world with more women on the screen, if we want it.
Some years back Catherine Zeta-Jones answered when asked if she wanted to play a Bond Girl „No, I want to be Bond“.